How can we help you today?

started a topic almost 5 years ago

I was wondering if there was a way to filter years by recording year. It doesnt make sense to do this by release year, specially for classical music and soundtracks.

1 person has this question
5 CommentsSorted by Oldest First
F

said over 4 years ago
Hi, I was wondering if there's a new status on this? Would love to have it.

It's not currently planned but I'll take the opportunity to ask a few questions related to this:

The current "year" view in Helium Streamer is based on release year. This way we can show both releases and tracks (as seen by the tabs in the picture below): 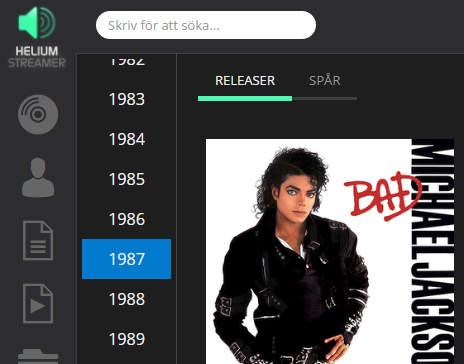 Do you think an option to see a list of recording years and then just a tracklist is sufficient for this new feature?

I want it to be exactly like it is with release year. You select a year, then you see releases first, and a separate tab for tracks. For example, if I have the 2011 Epic Records release of Michael Jackson's Bad, I would love to find it under 1987 because that's where my memories are, that's when I knew it, but when I go to the album, I see it's the 2011 Epic release with the bonus tracks.

Thanks for the additional details. We will look into supporting this.